in Independent, Miscellaneous
0
Be the first to write a review
Write a review Subscribe
Is this your listing? Claim it here!
Visit Website
Overview Photos

Random Access Memories, by Stacey Gotsulias
in Independent, Miscellaneous
Be the first to write a review
Write a review Subscribe
Overview Photos 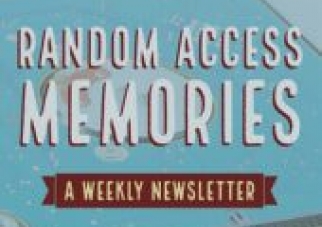 I said when I first started this newsletter that I’d write some random thoughts posts and I have yet to do that. Well, wait no more!

It follows the format of my Random Things About Random Stuff feature that I include in nearly every newsletter...

Fun! So grab a drink and a snack, sit back and relax. This may take a while.

It’s Monday October 28, 2019 which means Friday will be November. November!!

How did that happen?

Why is this year flying by?

We’re inching closer and closer to the year 2020.

How crazy is that?

When I was a kid, everyone else looked at 2000 at some sort of waypoint. Not me. I was all about 2020. I thought that would be the year we’d be flying around in cars and going to the moon with regularity.

Boy, was I wrong!

Boy, was I wrong!

Again, how did this all happen?

It feels like the last 20 years have flown by.

2020 will mark the 10th anniversary of my breakdown. The breakdown that led me down the path to 2019 Stacey.

That breakdown made me agoraphobic. I was afraid to leave my house for months and when I did, I’d have a panic attack.

I can’t tell you how many times people had to rescue me at a Yankee game.

My brother, my friend Matt, my cousins…

I still tend to get a bit panicky in big crowds. And I’m a tall girl! I couldn’t imagine being my mom’s height and in a big crowd.

I’m 5’9” so I don’t exactly tower over people but I’m still similar in height or taller than a lot of people at Yankee games.

Seems some people are upset that the President was booed at the baseball game last night.

I don’t think he was booed enough.

He should be booed everywhere he goes.

Anyway, enough about the orange menace.

You know what I realized this morning? I’ve been in a depressive episode for about two weeks. Fun!

It’s great when your meds don’t control that stuff.

But they help me sleep so it’s better than nothing.

If I screw up my sleep pattern, I can spiral. Rather easily.

It’s scary when it happens but I’m so used to it that I just ride it out until it’s over.

I’ve learned to cope with my myriad of illnesses.

Though I do miss pre-breakdown Stacey. A lot.

She sometimes appears but it’s pretty rare these days.

Of course, it doesn’t help that the news seems to be so depressing every day.

People with “normal” brains can’t handle the news in 2019.

Something else that happens when I’m stressed, anxious, and depressed: Vertigo.

I keep veering to the right and if I lay on that side, the room will start to flip.

Vertigo is a trip.

And not a fun one.

I started a new story on October 11 that’s hovering around 22K words.

I know. That’s a bit much. In total, I’ve written about 235K words of fiction since early June.

It’s too bad I can’t write about baseball anymore.

And I know, you’re thinking, “Well, just write about baseball!”

I can’t. I’ve tried. I’m afraid to do it. I’ve talked about it in this newsletter.

I’m terrified of the rejection.

Why did I become a writer again?

Oh, did I mention the 17-minute long podcast I lost the other day?

I nearly cried. I was so annoyed. My software borked and didn’t back up that file. It backed up everything else.

I was so upset because I was actually happy with what I produced that day and was about two minutes from finishing the editing and posting it.

That still wasn’t as bad as the time I accidentally erased a year of journal entries on my word processor in college. I was despondent for almost an hour.

Yes, I’m so old I had a word processor in my dorm room.

A word processor without spell check.

I was my friend Dan’s spellcheck when he used my word processor.

Most people didn’t have their own computers.

We had to go to computer labs to do work.

I usually chose to go to the Mac lab. I liked the interface better.

I still have my word processor. It’s my bedroom. Not hooked up or anything. I don’t think it would work. That thing is over 25 years old.

If I could go back to college, I’d do things a lot differently.

I would have tried to do better instead of just being happy with Bs and Cs.

I would have tried to intern somewhere.

I never did any of that stuff.

Then I went into a sales job right out of college and didn’t try to get into sportswriting until I was well into my 30s.

And while that worked out for a while, the work has dried up for me.

It’s funny how I’m finally using my degree more than 20 years after I earned it.

Better late than never, I suppose…

Okay, that’s all I can get out of my brain today. I promise I’ll have a more substantial newsletter coming up. I’ve gotten a few ideas over the past couple of weeks. We’ll see what happens.

Have a good week! 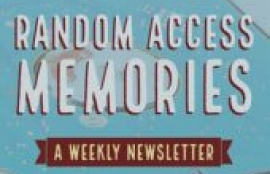